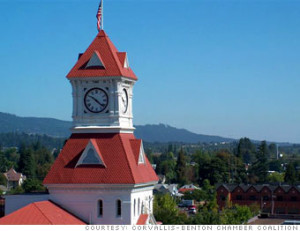 It all began in 1991, when a small group of senior citizen friends from St. Mary’s Catholic Church in Corvallis, Oregon gathered and someone suggested, “We need a residential facility for older persons in our community…and we need to locate it conveniently on the vacant church property next to St. Mary’s at 23rd and Fillmore.”

Interested parishioners formed a planning committee and surveyed other parishioners. They visited residential facilities in the area, as well as other cities. General concepts were developed, and ideas for services and operation of the facility were explored. Initially, the intent was to build a retirement facility, but later, it was determined the facility should provide assisted living. From the very beginning, the committee agreed they wanted to serve seniors from the broader community, not just members of St. Mary’s church. No assisted living facilities in Corvallis at the time served persons on Medicaid. Therefore, it was important to the planning committee to include seniors on limited incomes.

In 1993, a nonprofit corporation was established, and the initial board of directors organized. Rich Rodeman, former city attorney and community leader, became the board’s first president. Other members of the board included: Ron Bentz, Jerry Fox, Jerry Hortsch, Betty Johnson, Francis Johnson, Joe Malcom, Jack Moran, Mario Pastega, and Dale Ramsay. Bishop Kenneth Steiner was an ex-officio member of the board.

Initially, the corporation was established in connection with the Catholic Archdiocese of Portland. Later, the nonprofit corporation was reorganized independent of the Archdiocese, and new board members were added to represent the broader community.

The grand opening was celebrated on July 1, 2002. Corvallis Caring Place opened with 42 studio and one-bedroom apartments and a full range of support services and activities to enhance the quality of living for elders in our community. The first resident to be welcomed to Corvallis Caring Place was retired Corvallis physician, Dr. James Riley.

In March 2005, Corvallis Caring Place celebrated another milestone when permanent financing for the facility was arranged with U.S. Bank.

Today, Corvallis Caring Place under a management contract with Mennonite Management Services, continues its reputation for quality services in the community. The board of directors has established standing committees to carry out its oversight functions as the owner, including quality assurance, community relations, facilities, and finance.

Corvallis Caring Place, the only nonprofit assisted living facility in Corvallis, is alive and well. The corporation’s board includes experienced professional and business people from the community who are committed to our mission – provide compassionate care while preserving dignity in a life-enriching environment.